THANK YOU EACH AND EVERY ONE!

In a world of felines, corruption, injustice, murder and crime runs rampant. The safety of the city falls into the hands of the NYPD Special Agents that work the nightshift. More than just your plain ole cat-burglars cause them problems.

Welcome to the Nightshift comic. This story is about a world full of cat characters. Which focus is mainly on the characters of the good guys of NYPD and the cat burglars of Big Claws gang. With a huge swing into supernatural with the vampire lives of Cage and Travis. Why the vampires you may ask? Lets just say that this whole would has been in my head since 1992 and I have had a lot of inspiration throughout the years. Things that I wish I could had done different with this comic would had been to create a fictional city and world. They are forever stuck in the early 2000's, but I sometimes slip in more modern tech and vehicles at times.

So. Recap. Cops and robbers, a vampire that wants to be good, so becomes a cop. There we go! Enjoy! 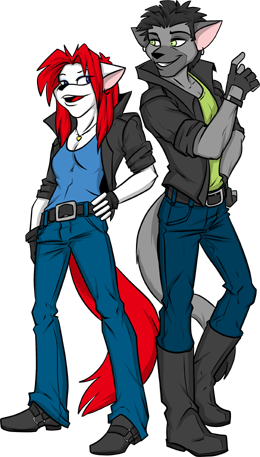 RATING: 15+
Suitable for readers of age 15 and up. Contents may contain moderate violence, mild profanity, graphic imagery and suggestive themes.